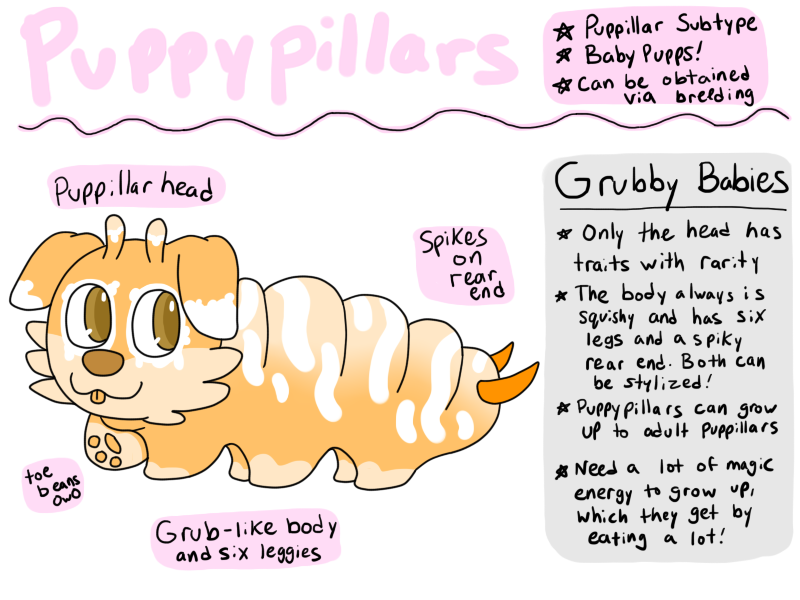 Baby Puppillars are chubby and grub-like! They can instinctually take care of themselves pretty well, but as many Puppillars live in their own societies, many Puppypillars are taken care of by parents. All Puppypillars have a furry head, soft squishy bodies with six stumpy legs (which can either be depicted as furry or smooth), and defensive spikes on their rear-ends. Puppypillars heads are covered in fur and have typical puppillar traits like ears and feelers, though these can change during a puppypillars growth cycle.

Growing up with magic

Puppypillars have a special kind of magic about them, it takes a lot of magical energy for them to grow from little grubby babies into into full-fledged puppillars with all their legs or wings, and other wild traits! Between this baby stage and adulthood, Puppypillars hunker down and form a chrysalis, using the magical energy they have stored up in order to transform into their adult forms. While some things change during this transformation, the puppypillar's coloration and markings remain mostly unchanged.

Puppypillars can "grow up" in the ARPG and have their design replaced with the grown up version (though of course the puppypillar design will still be archived on the masterlist). For full details on the growth process, please see our Puppypillar Tutorial.

how to obtain a puppypillar

Paid Breeding: The main way to obtain a puppypillar is through breeding, where a staff artist will create a puppypillar design (or designs) for you based off two "parent" puppillars. Occasionally, we may also offer these types of breedings for free via raffle or event. For a complete guide to breeding, see our PuppypillarTutorial.

Adopts and Customs: Occasionally, we will have premade puppypillar adopts for sale, or as raffle or event prizes. You are also able to commission a staff artist for a custom puppypillar if you want a more specific design, or don't want to use a "parent" as inspiration. All info for artist customs can be found at our Artist Customs page.

Puppypillars have the same trait rarity system as their adult counterparts, but their traits are limited, puppypillars only have traits based off their head/face, such as ears, feelers, and eyes. Puppypillars also have two of their own unique features: puppypillar body and puppypillar spikes.

Puppypillar bodies are all roughly the same, with six nubby legs (with pawpads), and a chubby grublike body.

Puppypillar spikes can be varied in size and shape, but are always located on the rear-end.