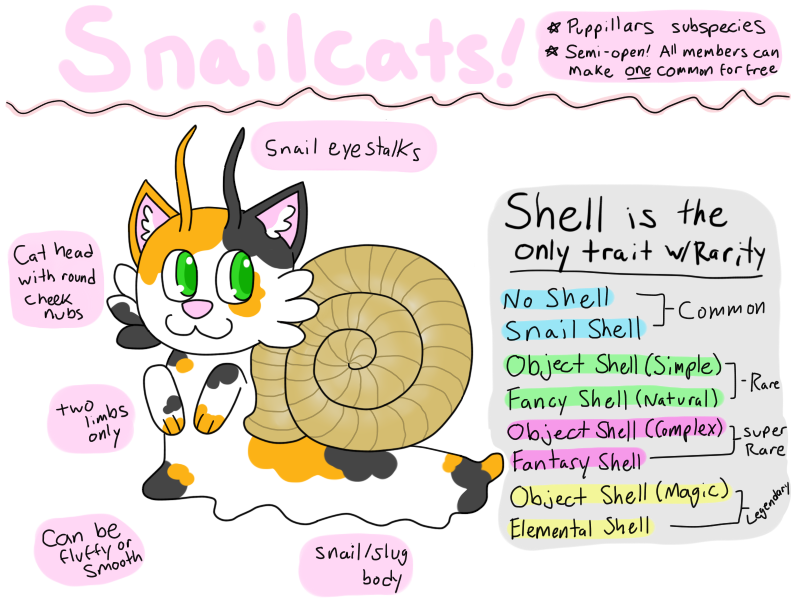 Snailcats live in this world alongside Puppillars, their societies have been intertwined for a very long time, and you can often see Snailcats living in Puppillar settlements, like secret glades, and vice versa. Snailcats have their own settlements, but also have a tendency to be nomadic, seeing as many of them have shells they can curl up into as thier home, though once some snailcats have started to accumulate too many belongings, they tend to settle down somewhere. Most Snailcats have a shell, but some are born without one, and more closely resemble slugs.

All Snailcats have snail eyestalks, only two limbs (the front limbs), rounded cheek fluff, and a snail body. Their shells can vary greatly, from the natural to the supernatural, and are the only Snailcat trait tied to rarity!

Snailcats with shells possess a rather unique magic in their shells. All Snailcat shells, regardless of type or appearance of the shell, function as a snail shell that the Snailcat can fully withdraw into. All Snailcat shells are technically shells, through magic they can mimic the appearance, feel, and other qualities of the objects they depict. As rarity goes up, the more complex the magic of the shell is and is able to mimic more complex objects, and even elements! Once a shell has manifested its looks, those looks cannot shift at whim to another appearance (though this can be done for ARPG purposes through re-design).

How to obtain a snailcat

The different types of Object Shell are differentiated as follows:
Simple: Maximum one moving part  that functions without magic (ex: Teapot with a lid)
Complex: Two or more moving parts, can perform one realistic primary function with some magic (ex: a pocketwatch that tells the time)
Magic: As many moving parts as desired, object is fully functional as the object it is, and the magic can go beyond what the object is (ex: a house that is a full house inside with multiple rooms, electricity, and shrinks any guests down to join the snailcat inside)

The MYO process is the same as submitting a Puppillar MYO, but there are some things to keep in mind: